This is Jim scuba diving for the first time while live on TV.

Jim says: "The hardest thing for me was remembering not to talk while underwater." 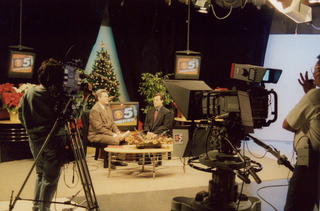 On the air in Phoenix. 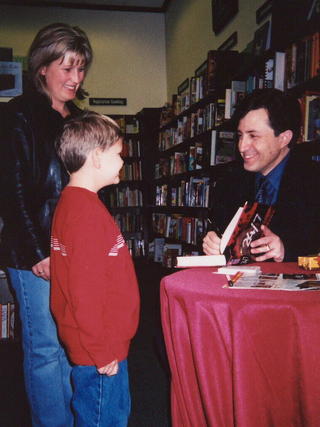 With Taylor and Lynne Lamb.

It is estimated that millions of trees in the world are accidentally planted by squirrels.

"If squirrels were to harvest all the nuts in the world, there would be no one left in politics.”

Do you miss playing football?

Wrong guy. I’m Jim Brown the writer/journalist. I also answer to “The news-dude” and “hey, you with the big hair.”

So how does it feel being the “Godfather of Soul”?

Again, wrong guy. You’re thinking of James Brown, the singer. Although I do feel good.

The New York Post called 24/7 the first ever “reality-TV novel” and I know you’ve done a lot of interviews on the subject. Tell the truth. Do you really watch reality TV?

Only in so far as it can be used as research and only then. . . (lower lip trembles, sweat on brow, hands shake) . . . OKAY I CONFESS. I’m hooked. I watch them all. It’s a sickness. I need a good 12-step program. Hey, "12-STEPS" a reality show about breaking addiction. Excuse me while I call Mark Burnett.

24/7 is one of the fastest paced novels I’ve ever read. Was that on purpose and if so why?

I wanted to capture the immediacy of live TV, as well as provide the reader with an ejection seat from the rigors of their world to the twisted corners of mine.

Cool suspense. I really like the thing with the tarantulas.

Thanks. I originally used Care Bears but that was just too scary.

Is it true you write in McDonald’’s?

I used to. In fact, almost all of 24/7 and Black Valley were written in McDonald’s and Wendy’s on Willamette Street in Eugene, Oregon.

I've spent most of my life working in television newsrooms and so I've become accustomed to the white noise of people talking (plus I live on caffeine). So I used to start my day writing for about three hours at McDonald's.

Now that I’m in California I’m finally writing at home. {But my office is so cluttered that when I finally get to my desk I feel like I should be rewarded with a piece of cheese.}

Has television influenced you?

For twenty years I was a TV anchor and reporter. And my first novel, 24/7, deals with reality TV. So it’s safe to say television has had a huge effect on me. But beyond that TV is influential if for no other reason than it exposes us to a wide variety of things ranging from Jerry Springer to spring training, from Lindbergh to liposuction. And who among us has not been effected by what we saw on television on September 11th?

Do you know the ending to your book when you start writing?

I like to fool myself into the thinking that I do. But so far, I'm always wrong. By the time I reach the end of a novel the characters have pretty much taken over. I argue with them, try to assert my dominance, gesture wildly at the outline, all to no avail. As long as their ending is better than mine I'll live with it.